The Flame Still Flickers In The Fen

There you have seen the true dark enemies of England. Sick father and mother who would have us children forever. Stephen, our land must live. This land we love must live. Her deep, dark flame must never die. Night is falling. Your land and mine goes down into a darkness now, and I, and all the other guardians of her flame are driven from our home up out into the wolf’s jaw. But the flame still flickers in the fen. You are marked down to cherish that. Cherish the flame till we can safely wake again. The flame is in your hands, we trusted you, our sacred demon of ungovernableness. Cherish the flame. We shall rest easy.
- King Penda in Penda's Fen (written by David Rudkin)

A year ago I watched the BBC Teleplay Penda's Fen for the first time, on recommendation from my minister.  It's from 1974 and is about a gay teen in rural Worcestshire whose conservative and christian biases are challenged by visions given to him by the Fen he inhabits.

To say it affected me is an understatement.

The Flame Still Flickers In The Fen is an attempt to capture and modernise the feelings it gave me.  You play teenagers, who are genderqueer, but they don't know it yet.  You live in the kinds of places me and my friends grew up in, towns on the rural-urban fringe, where twenty minutes on one bus takes you into a major city and twenty minutes on another strands you in the middle of nowhere.  There's something liminal about these places, and the natural environments that grow within them, where you can hide yourself among the trees and foliage and pretend you've escaped the motorways and farmland and shops less than a mile away.   Where the divine seeps in and becomes inescapable.

This game invites you to allow yourself to become distorted and twisted by those places and the things you find inside them.  It asks you to consider the politics of the outer world, and how they affect you, even when you run away from them.  It demands of you to fight against them.

It's important to me, and I hope you like it.

The Flame Still Flickers In The Fen.pdf 9 MB

Alternative Ways of Getting The Game

Support this roleplaying game at or above a special price point to receive something exclusive.

Buy the game and add a Community Copy

Thank you for your generosity!  You'll get a copy of the game and I will add another community copy for a marginalised person who can't afford it!

If you earn over £80k/pa and you're cisgender then I am asking very nicely for you to give me more money because I think you can afford it.

ALL the community/nature/gender-fucked feels. I love this. 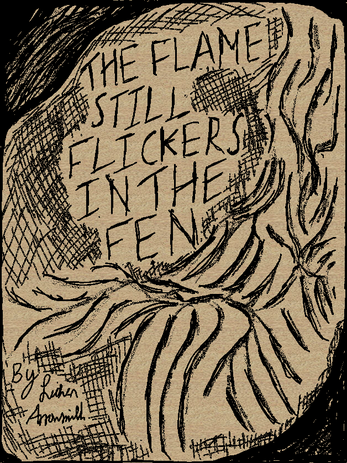